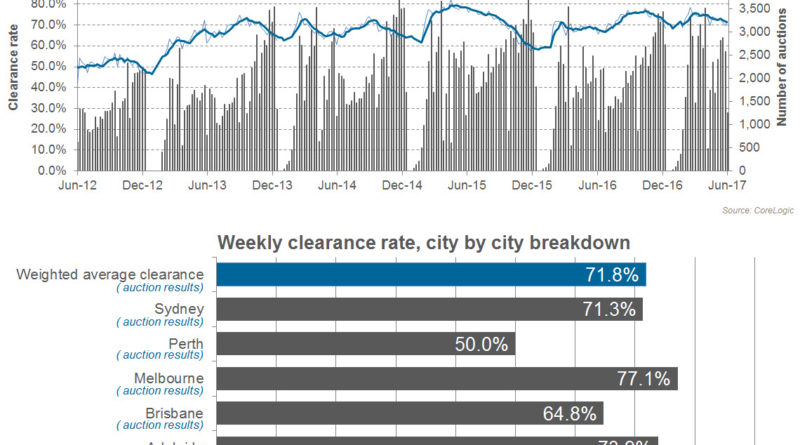 The number of auctions held this week saw a significant decrease, with 1,265 properties taken to market across the combined capital cities, down from 2,578 over the week prior. The decrease in auction activity this week is attributable to the Queen’s Birthday public holiday this Monday, which has affected activity across most states, including Australia’s two largest auction markets. The lower volume is consistent with what is historically seen over this period, with 1,100 auctions reported over the same week last year. Last week saw the final auction clearance rate revise lower to reach 69.8 per cent; an equal second lowest clearance rate for the year so far.  The final clearance rate last week was the lowest over 2017 to date in Sydney and Melbourne.  This week the preliminary auction clearance rate increased slightly to 71.8 per cent, however it is typical to see clearance rates revise lower as final results are collected.

Across Melbourne, this week’s preliminary clearance rate was recorded at 77.1 per cent, up from 73.1 per cent last week and remaining well above the clearance rate for the city one year ago (64.5 per cent). This week, Melbourne was host to 392 auctions, lower than the 1,188 held last week, but higher than a year ago when there were 341 Melbourne auctions held over the week. Of the 9 individual Melbourne sub-regions, this week the strongest performer, in terms of clearance rate was the North West. So far, CoreLogic has collected 29 results for the region and the preliminary result shows 89.7 per cent of these auctions were successful.

This week, Adelaide saw a preliminary clearance rate of 73.9 per cent, with 46 reported results across a total of 66 scheduled auctions. In comparison, over the previous week Adelaide’s clearance rate was 59.3 per cent and 75.4 per cent one year ago.

There were 42 Perth auctions this week and so far 12 results have been reported, with just 50.0 per cent selling. Last week there was a 47.6 per cent clearance rate for Perth

Tasmania saw 4 auctions take place this week, 3 results have been reported so far, with 2 sales.