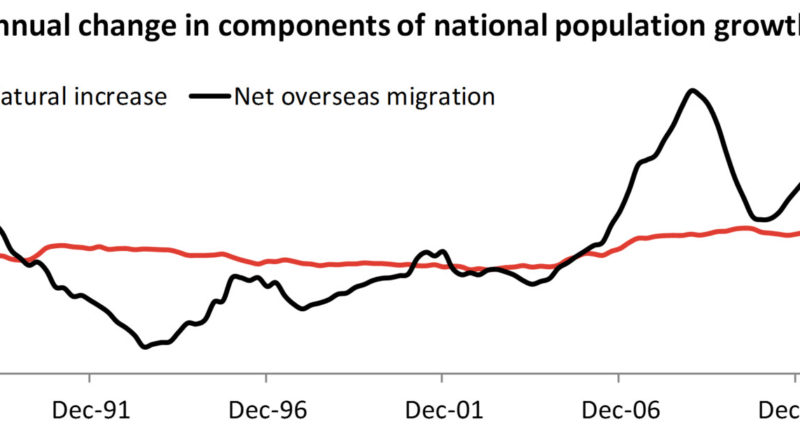 Over the year, the national population increased by 372,805 persons or 1.6%.  The 37,805 person increase was the greatest since March 2014 (373,116 persons) which was also the last time the population grew as rapidly as it is currently.  Looking at the components of this population growth nationally, 56% (208,953 persons) was due to net overseas migration with the remaining 44% (152,578 persons) being due to natural increase or the difference between births and deaths.

In terms of annual growth, Victoria (2.4%) has seen its population growth rate dramatically exceed all other states.  The Australian Capital Territory (1.7%), New South Wales (1.5%) and Queensland (1.4%) have each seen slower rates of growth but fairly rapid population growth relative to the other states and territories.  Elsewhere the annual rates of population growth have been recorded at 0.7% in South Australia, 0.6% in Western Australia and 0.4% in both Tasmania and Northern Territory.

Interstate migration nets to zero at a national level but it is an important consideration across the individual states.  Over the 2016 calendar year, net interstate migration saw positive inflows into Victoria (17,987 persons), Queensland (14,652 persons), Tasmania (467 persons) and Australian Capital Territory (621 persons) while net losses were recorded from New South Wales (-12,822 persons), South Australia (-6,903 persons), Western Australia (-10,824 persons) and Northern Territory (-3,178 persons).  Net interstate migration into Victoria is at an historic high and at its highest level since June 2009 in Queensland.  Meanwhile, the net outflow is at its highest level since June 2013 in New South Wales, at its greatest level since March 1996 in South Australia and at an historic high in Western Australia.  While the New South Wales and Victorian economies are both strong it appears that people who already live in Australia are choosing to move to Victoria rather than New South Wales which is likely to be at least partially linked to housing affordability.  This would also help to explain the recent acceleration of net interstate into Queensland and the fade in New South Wales.

Australia’s Commercial Construction Hot-Spots; They Are Not Where You Think They Are.